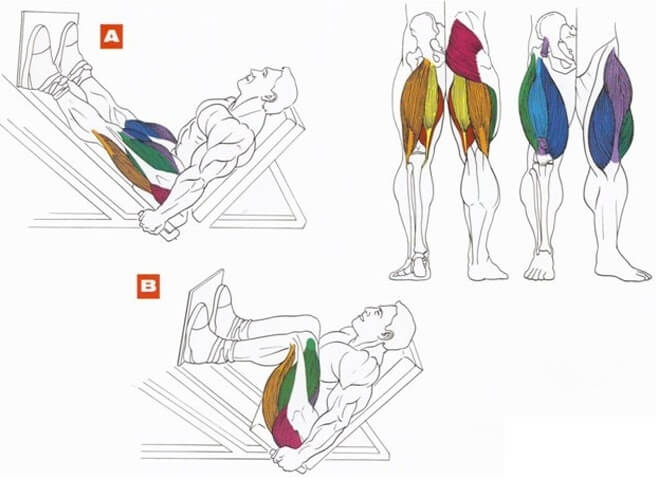 Leg press is a basic (multi-joint) exercise intended to develop the muscles of legs and buttocks. The exercise is performed in a special machine, where a platform with weights, which also serves for placing legs, moves along the guides. Mainly, quadriceps work in this exercise. In addition, biceps femoris and gluteal muscles are included in the work.

Depending on the position of legs on the platform, the load between the working muscles can vary. Since the exercise involves fewer muscles than barbell squat, leg press should be done after barbell squat.

Varieties and technique of leg press

There are not as many types of leg press as, for example, barbell squat. Basically, they consist in different variations of placing legs (in width or in height). 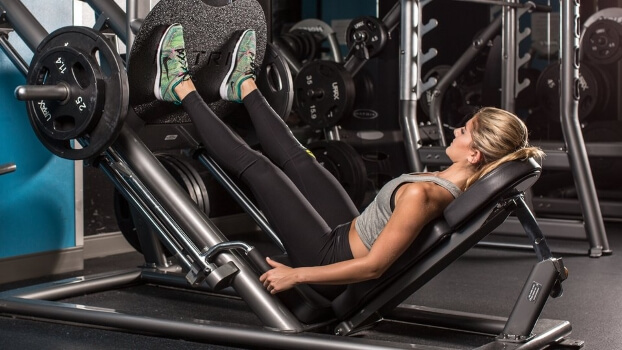 The conventional leg stance is meant one in which legs are shoulder-width or slightly narrower, in height they are in the middle of the platform, and toes are turned towards knees. With this positioning of legs, your quads will be well loaded. Biceps femoris and buttocks will also participate in the work.

When you take the starting position in the machine, the back and lower back must be pressed to the back of the machine. It is best to place the head in a special pillow located slightly higher on the back of the machine, so the chance of injuring the spine will be less. Then you press the platform with weights, remove the clamps, and begin to perform the exercise, bending and unbending your knees.

The legs should be bent strongly, stretching the muscles as much as possible. But they should be bent to such a position that the lower back does not come off the back of the machine. The separation of the lower back from the back of the machine will lead to its injury. Therefore, to increase the amplitude, knees should be slightly apart. But it is not worth unbending legs to the end, so as not to load knee joints and protect them from injury. In addition, in this way muscles will be in constant tension during the whole set. 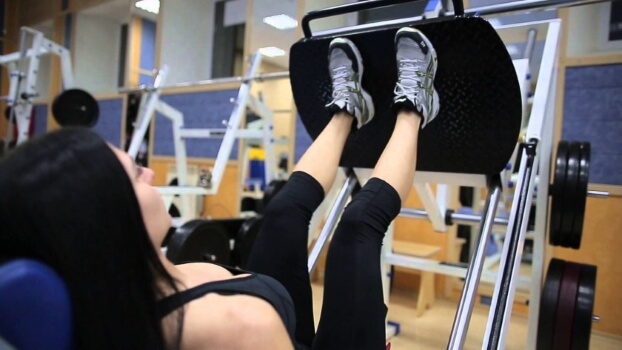 A narrow leg stance is defined as one in which legs are narrow in width, almost touching each other. This positioning of legs will lead to a shift in the load towards the outer surface of the quadriceps. In addition, a narrow stance of legs shortens the range of motion, since knees at the lowest point of the amplitude will rest on your chest, and it will be problematic to move them apart without breaking the technique. 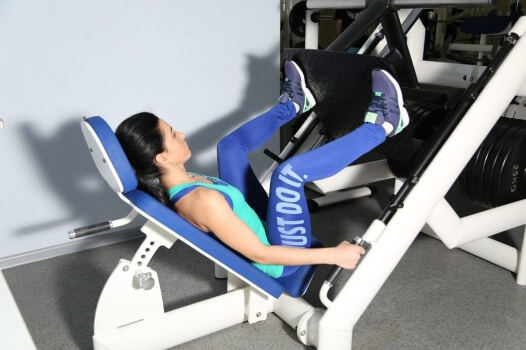 A wide leg stance is defined as one in which legs are wide apart. This leads to a mixing of the load on the inner thigh. This variation is most relevant for girls.

In addition to the fact that legs can be placed different in width, you can also vary the position of the legs in height. When you place your feet high on the platform, your biceps femoris and glutes will be more involved. If you put your feet on the platform low, then the quads will work harder. The load on different leg muscles can also be varied by turning feet. When feet are turned inward, the load will be shifted on the outer surface of the thigh. When feet are turned outward, the load is shifted to the inner surface of the thigh and adductor muscles.

Eventually, we can conclude that for girls, the priority will be to work with a wide stance of legs, trying to position legs in height above the middle of the platform and turn feet outward. For men, it is best to work in the classic version with an average placing of legs in width and height.

1) Breathe correctly while doing the exercise, and do not hold your breath. When bending legs, inhale, when unbending, exhale.

2) Do not chase weights, concentrate on muscle work, do the exercise with the correct technique, stretching muscles as much as possible at the lowest point and stressing at the top. In the gif above, Ronnie Coleman is pressing 1040 kg with his legs, a phenomenal result, I think many have watched this video.

But you don’t have to compare yourself to a professional bodybuilder. I did not post a GIF where the athlete’s legs turned (broke) in knees in the opposite direction when performing leg press. After such a gif, the desire to approach this machine disappears altogether. Of course, that athlete overdid it with weight, but if you do everything wisely, then this exercise will give you only advantages.

3) Do not move your knees to each other, this will injure your knee joints. Most often this happens due to an incorrectly selected working weight. Therefore, if you notice that your knees begin to converge during the exercise, you should reduce the working weight.

4) Use a limiter. The leg press machine has a limiter to prevent you from being crushed by a heavily loaded platform. Before doing the exercise, you should adjust the height limiter so that at the lowest point of the amplitude you do not hit it with the platform. 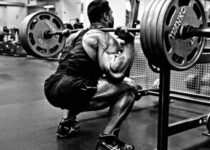