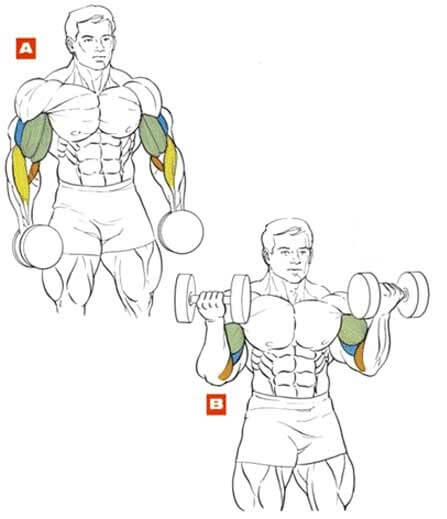 Dumbbell biceps curl with supination is one of the main exercise intended to develop the biceps of the arms. The load in the exercise will be distributed between the inner (short) and outer (long) biceps bundles. The good thing about this exercise is that it trains both functions of the biceps such as arm flexion and hand rotation. Therefore, the stress of the biceps, compared to barbell biceps curl, will be greater. Anyway, the exercise should be performed after you have well loaded the biceps with the basic barbell curls.

The main differences in the exercise are that it can be done while standing or sitting. In addition, the dumbbell lifts can be performed alternately, or both dumbbells can be lifted together.

The arms are bent at the elbows and at the same time (as they rise) the hands are turned towards the thumb. This is supination. The elbows remain motionless in relation to the body, the shoulders must also be motionless. Then dumbbells are lowered to their original position. Moreover, it is best not to unbend your arms at the bottom point to the end, and not to bend to the end at the top point. We should work with dumbbells within the amplitude, as well as when doing barbell biceps curl, maintaining the tension of the biceps throughout the entire set.

The most important point in the exercise is the grip. Firstly, at the lowest point, your clenched palms look inward (towards the body). As dumbbells are lifted, the palms turn so that they look at you at the top point of amplitude, and dumbbells rotate by 90 degrees.

Secondly, dumbbells should be taken not in the middle, as it is usually done to balance them, but closer to plates that are located at the thumb. Thus, when lifting, there will be no balance of dumbbells, and when the hand is turned, the load will increase. It is the moment when the biceps will experience supination. If you hold dumbbells as usual in the middle of a dumbbell, the load will not increase when lifting and turning the hand, since dumbbells are balanced. Accordingly, the biceps will not experience supination. 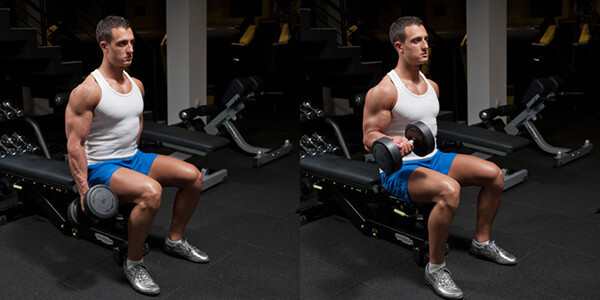 The only difference from the variation described above is that you will be sitting while doing the exercise. This will lead to the fact that most likely your hips and pelvis will interfere with lifting dumbbells. Accordingly, either the technique of performing the exercise will be broken. Or you will have to move your arms wider, which will shift the load to the inner biceps bundle, which already receives more load in almost all biceps exercises. Therefore, I advise you to do the exercise while standing.

1) Do the exercise without jerking, gently raise and lower the dumbbells, feeling your biceps work.

2) Do not hold your breath while doing the exercise. Raise the dumbbells as you exhale, and lower them as you inhale.

3) Do not put your elbows forward. Ideally when they will not move at all and will be pressed against the body. You should do only flexion and extension of the arms  in elbows. If the elbows are put forward, then part of the load will be shifted to the front deltoids and in some way it will resemble the exercise called dumbbell front raise. 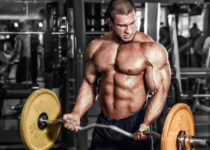