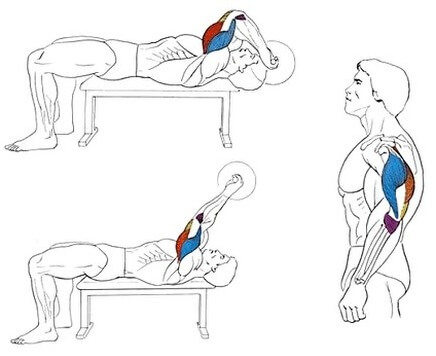 Overhead barbell triceps extension is an isolated (single-joint) exercise intended to build the triceps. In this exercise, only the elbow joints work, unlike the close grip bench press or dips, where the shoulder joints also work. Therefore, the exercise works out all three triceps bundles very well and in isolation. Also, the exercise is well suited for girls, for the formation of beautiful and toned arms. It is better to perform the barbell triceps extension after the close grip bench press, when you have already loaded the triceps well.

The overhead barbell triceps extension can be performed lying or standing (sitting). In addition, you can perform with a straight bar, with a curved bar (EZ bar), or even with one or two dumbbells. In this article, we will consider options for performing an exercise with different bars. 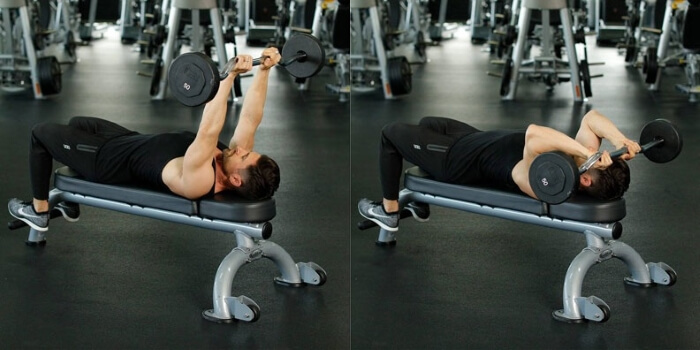 Starting position: take a curved barbell in your hands, lie down on the bench, press the barbell to the position in front your eyes and begin to perform the exercise by bending and unbending your arms at the elbows. The grip in the exercise is straight and narrow (palms are away from you, at an angle to each other due to the curved bar). It is not worth taking too narrowly to prevent moving the elbows apart in the lower position. It is better to grab the first fold of the EZ bar.

When you pressed the barbell (in the starting position) and hold it on straight arms, you should tilt your arms slightly towards the head so that the angle between the body and arms is slightly more than 90 degrees, and the bar is located opposite the eyes. The barbell should be lowered not in the forehead area, but behind the top of head, slightly touching it. All this, firstly, will increase the range of motion. Secondly, it will shift more load to the long triceps bundle, which almost does not work in triceps exercises and often lags behind. Well, thirdly, it will simply save your forehead from a blow if the barbell accidentally falls. 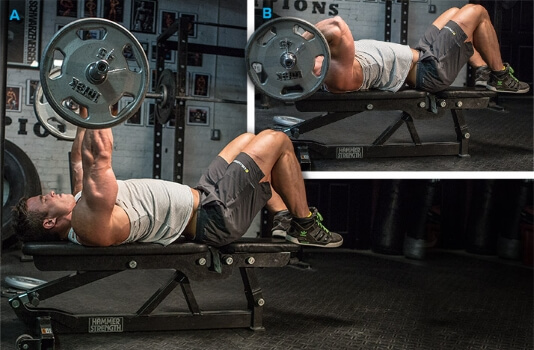 In this variation, only the bar changes, from EZ to straight. The rest described above remains unchanged. The grip with a straight bar will be exactly the same as with a curved, straight and narrow. But now, the palms in relation to each other will not be located at an angle, but be on the line. This position is not natural for flexion and extension of the arms at the elbow joints. Accordingly, the chance of injury of the elbow or carpal joints increases.

By the way, the least traumatic triceps extension is when your palms are pointing at each other (neutral grip), that is, when you have dumbbells in your hands. 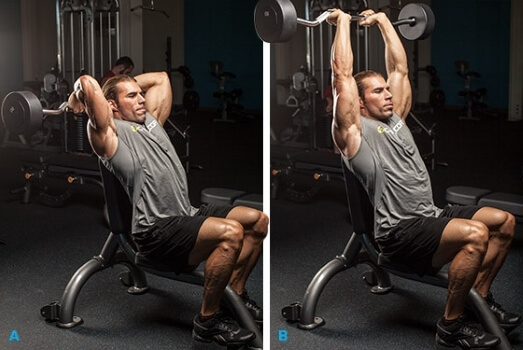 The difference from the variations described above is that in the starting position you are sitting (or standing), not lying. Accordingly, the load on the lumbar region increases. But since the barbell triceps extension is an isolated exercise, you are unlikely to be working with a lot of weight. Therefore, the load on the lower back will not be as significant as, for example, with barbell shoulder press.

The second difference is that while sitting (or standing), the range of motion of the barbell increases. This is a benefit but requires good flexibility in the elbow and shoulder joints. Therefore, if you do not have proper stretching or you experience discomfort in the joints while doing the exercise, it is better to refuse the exercise.

1) Perform the exercise with the correct technique, without jerking, smoothly bend and unbend your arms with a barbell, feeling the stress and stretch of the triceps.

2) Do not hold your breath while doing the exercise. Bend your arms as you inhale, and unbend as you exhale.

3) When doing the exercise, do not bend your hands at the wrists. This usually happens at the lowest point of the amplitude, and turns off the triceps from work. 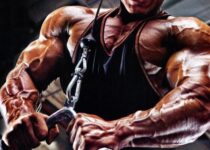