Home » Exercises » Back » Back Extension 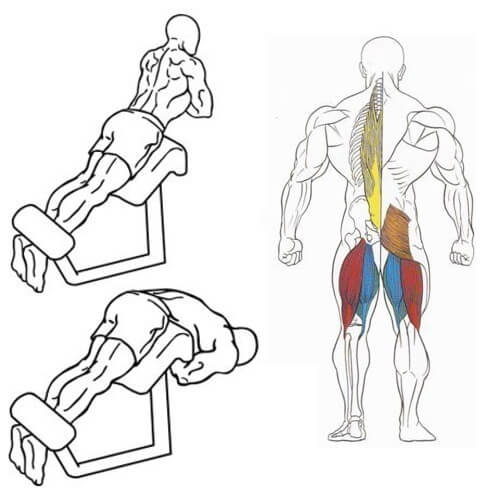 Back extension is an exercise intended to work out and strengthen the extensors of the back. The back extensors are very important muscles in the human body as they serve to support the spine. In addition, when performing the exercise, the back of the thigh and buttocks are included in the work. The exercise is well suited for girls or those who, for various reasons (most often injuries), cannot perform deadlift. In addition, athletes who perform deadlift often use this exercise to warm up the extensors of the back and biceps femoris.

Varieties and technique of back extension

There are not many varieties of back extensione. You can do it: in the GHD machine, on the Roman chair or on the floor.

Let’s take a closer look at each type of the exercise and analyze the technique.

Back extension on the Roman chair

The most efficient and convenient variant. It is performed in a special chair, which can be found in almost every gym. Back extension in the Roman chair can also be called weighted back exension if you do this exercise with an additional plate (weight). One more name is hip extension if you do this exercise purposefully for your hips. The technique of performing hip extension will a bit differ from back extension. I will describe it below, contunie reading 🙂

In the starting position, the body is tilted slightly forward relatively to the floor, the head also looks forward. The lower of legs places against special soft rollers. Thigh pads should be positioned in such a way that they do not interfere with the trajectory of movement of the body. The top of the pads should end at the top of the thighs to allow unhindered flexion of the torso. The back should be kept straight during the exercise. At the lowest point of the amplitude, a slight rounding of the back in the lower back is allowed to increase the range of motion.

The body should be bent to about a 90-degree angle, between the back and the hips. With this technique, the back extensors will work as much as possible. If you want to shift the load on the buttocks and the back of the thigh, then on the contrary, you should bend your back a little, protruding the buttocks back. And the pads placing on the quadriceps should be slightly lowered below. As I’ve said, it is called hip extension.

Hands should be kept in front of the chest, or behind the neck. You should not close your hands behind the neck in a lock so as not to overload the cervical vertebrae. After doing the exercise, you should feel that your back extensors are pumped with blood, leaning back, you will feel tension in the lower back.

After you master the correct technique and are able to perform 3-4 sets of 15-20 repetitions, you can start increasing the load. To do this, you need to take a plate (start with 5 kg) and hold it against your chest while performing the exercise. You can see it in the above gif. Also, the plate can be placed on the back, holding it with your hands. This type of the exercise is called weighted back extension.

Back extension in the GHD machine

In this variation of the exercise, the technique is absolutely the same as in the Roman chair. In fact, this is the same chair, only the body in the initial position is not at an angle, but parallel to the floor, which slightly shortens the range of motion.

Lower back extension on the floor 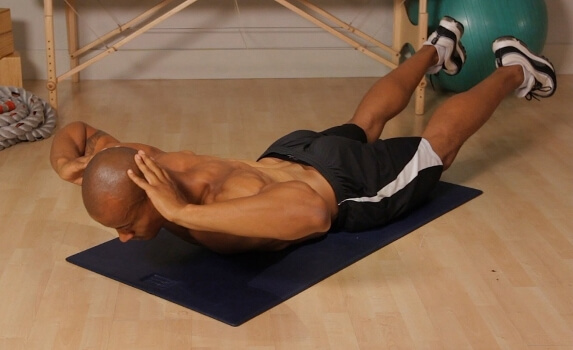 Home version of back extension. This exercise serves to strengthen the extensors of the back and abdominal muscles. The exercise is performed lying on your stomach, arms are parallel to each other, legs are in the similar way. When doing the exercise, you raise your arms and legs up, about 50 cm, and hold in this position for several seconds. Lowering the arms and legs to the starting position is done smoothly and slowly.

If the exercise is easy for you, then to increase the load, you can put on weights on your legs, or clamp a fitness ball between your legs.

Tips on performing back extension

1) When performing the exercise, do not make sharp jerks with the body, stick to the correct technique. Breaking of technique and hunching back leads to lower back injuries.

2) Breathe correctly while doing the exercise. Inhale when lowering of the body, and exhale during smooth rise.

3) Do not return to the starting position while doing the exercise. Leave some of the amplitude not made (about 15-20 degrees). This will allow the back extensors to receive a load during the entire exercise without resting at the top point. 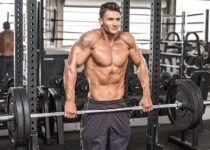 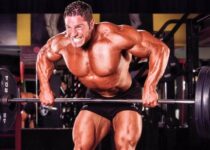 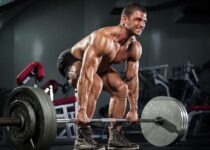